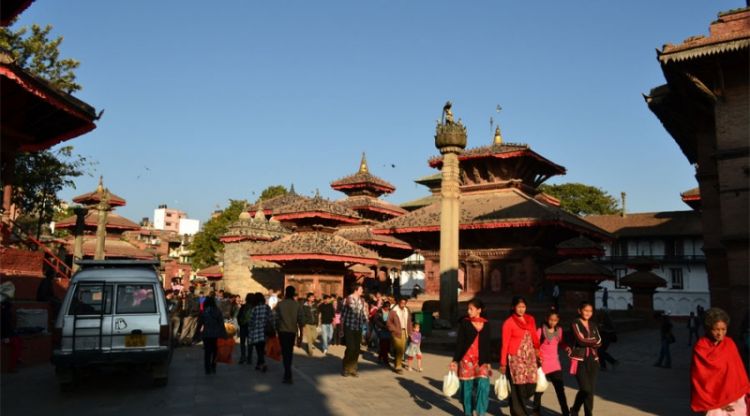 UNESCO has recognized four natural and cultural World Heritage Sites (WHS) in Nepal.  We organize intimate short tours to all the heritage sites in Nepal any time of the year. This is an opportunity to see the excellence and charming beauty of Nepal’s art and architecture and the unique wildlife and biodiversity in the heart of the Himalayas.

The medieval cities of Bhaktapur, Patan and Kathmandu, Changu Narayan Temple, Pasupatinath Temple, Swoyambhunath and Boudhanath within Kathmandu Valley have been inducted into World Heritage Site list. These cities and shrines display some of the world’s distinctive masterpieces of art and architecture, clearly visible in temples and chortens, courtyards, palaces, life-size sculptures and museums.

Swoyambhunath and Boudhanath are world’s largest Buddhist stupas that stand tall as a testimony to the significance of Tibetan Buddhism. Dedicated to Lord Shiva, Pashupatinath Temple is the most sacred temple among all Hindu devotees.

Lumbini is the birthplace of Lord Buddha, the founder of Buddhism and apostle of peace. Located in southwestern region of Nepal in the Terai plains, Lumbini is a world heritage site and one of the world’s greatest pilgrimage centers.  Hundreds of thousands tourists and pilgrims visit to this sacred site every year to pay their respects to Lord Buddha.

Spread over an area of 932sq km, the Chitwan National Park is Nepal’s oldest and the most visited national park. Originally a rhino sanctuary, this well protected area of sub-tropical forest was established in 1973 and consist of varied ecological landscape: Churia Hills, ox- bow lakes and flood plains of Rapti, Reu and Narayani Rivers .

The flagship species of the park are one-horned rhinos, Asian elephant, mugger crocodiles and Bengal tigers. Over 43 diverse species of mammals reside in the park, others including gaur, four-horned antelope, striped hyena, pangolin, monitor lizard and python. Chitwan is poplar for activities such as jungle safari to see the elusive Royal Bengal Tigers, One-horned Rhinos, Asian Elephants among others.

Everest National Park is one of the global ecological hotspots. It is home to Mt. Everest, no less. The park has been designated as protected area which is home to such endangered species as Snow Leopard, Himalayan Tahr and Red Panda, Himalayan weaselTibetan water shrew, Himalayan water shrew. But above all what makes this place is so special is the culture and tradition of world rewnowned Sherpa people. The Tengboche Monastery of the Buddhist Sherpas is a highlight of this region depicting unique culture.