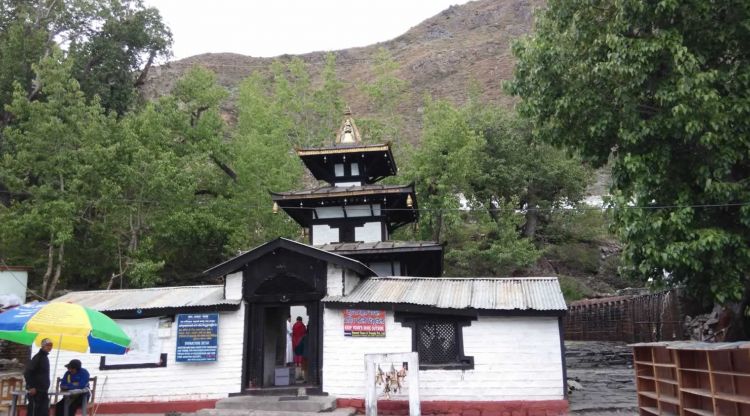 CHAR DHAM YATRA like Mecca for Muslims, Char Dham, literally the four sacred sites, is the pilgrimage that Hindus must do at least once in their life time. According to the Mahabharat, Pandavs – the five brothers – did this pilgrimage to wash away sins of killing their cousins and uncles. All the four sacred sites are in India – Badrinath, Dwarka, Puri and Rameshwaram. These sites draw Hindu pilgrims from all over India as well as Nepal. Not many people know that Nepal has its own set of Char Dhams. Though not popular among Indians, Nepalis have been doing this Char Dham pilgrimage for years. The Char Dhams in Nepal are (starting from east): Baraha Kshetra, Pashupat Kshetra, Mukti Kshetra and Ruru Kshetra.

Baraha Kshetra is an important Hindu pilgrimage site in eastern Nepal lying on the banks of the mighty Saptakoshi River which drains into the Ganges. The holy place is around an hour’s drive away from the buzzing town of Biratnagar – the commercial hub of eastern Nepal. Baraha Kshetra gets is name form the Baraha Avatar – the third incarnation of Lord Vishnu, according to Puranas. Lord Vishnu took the Baraha Avatar to kill demon Hiranyaksha. The main attraction of Baraha Kshetra is a white Shikhara-style temple dedicated to Lord Vishnu – one of the Trimurti or the holy trinity. It is believed that Lord Vishnu killed Hiranyaksha at this very place. This sacred site wears festive look during the Makar Sankranti festival with pilgrims from all over the country as well as India reaching this place to offer worship to Lord Vishnu. While in Baraha Kshetra you can visit the temples of Budha Subba and Dantakali. Or you can spend a night at the Bhedetar hill station on the Dharan-Dhankuta Highway. Your trip can be extended with a visit to Koshi Tappu Wildlife Reserve – a protected area and a popular wetland famous for birding.

Pashupat Kshetra is one of the holiest pilgrimages in Nepal. Pashupatinath Temple, which is dedicated to Lord Shiva – one of the Trimurtis or the holy trinity, is the major attraction of this area. This pagoda-style temple has a golden pinnacle at the top. The temple complex lies in the heart of Kathmandu, couple of kilometers away from the Kathmandu airport. Worshipped as the guardian deity of Nepal, Pashupatinath literally means the lord of animals. The temple receives a large number of worshippers and pilgrims from different parts of Nepal as well as India throughout the year. The Pashupatinath area is a UNESCO World Heritage and is frequented by tourists from all over the world. Tourists love to sit in a small park across the temple and observe activities of pilgrims. Many like to observe the last rites performed on dead bodies at the Aryaghat – a holy crematorium -- on the banks of the Bagmati River. There are many temples dedicated to different gods and goddesses in the Pashupat Kshetra. Guheshwari, Kiranteshwar, Basuki Nagraj, Bhairav, Budhanilakantha and Ganesh, among others, are the popular temples in the Pashupat Kshetra. The Pashupat Kshetra pulls crowd of pilgrims from all over the country as well as India during major festivals like Maha Shivaratri, Haritalika Tij, Bala Chaturdashi and the holy month of Shravan. You can offer special pooja at the temple by paying a fee prescribed by the temple authorities.

Mukti Kshetra is the abode of Muktinath – the god of salvation. This sacred place lies in Mustang district in north-western Nepal on the popular Annapurna Circuit trekking trail. Muktinath holds great significance for Hindus all over the world. Every year, thousands of Hindus visit the Muktinath Temple with the dream of achieving the Nirvana. Interestingly, the area is a common pilgrimage for both Hindus and Buddhists. There is a Buddhist monastery on the temple premises. Situated at an altitude of 3710 meters above sea level, Muktinath lies 18 kilometers north of district headquarters Jomsom. Indian pilgrims know this holy place as Mukti Dham or the place for salvation. According to Puranas, Muktinath is among the 108 Vaishnava shrines in the world. Hindus perform Shraddha ritual at Kagbeni in memory of the deceased family members before offering pooja at the temple. The best time to visit Muktinath is between March and June, and September and November as weather is pleasing at this time of year. You can also extend your stay by enjoying beautiful Thakali villages in and around Jomsom. Taste Thakali cuisines which are popular all over the country.

Ruru Kshetra also known as Rishikesh Tirtha is the other sacred site in Nepal. Also known as Rishikesh Tirtha, the area lies on the Kali Gandaki and Ridi Khola rivers in Palpa district. It lies near the small suburban town of Ridi. Ruru Kshetra lies about 30 kilometers away from district headquarters Tansen. The journey takes around one and half hours. The temple of Rishikesh, which was built by Mukund Sen – the first king of Plapa, is one of the attractions of Ruru Kshetra. According to legends, the king found the idol of god Rishikesh in Kali Gandaki River while he was taking a bath. He then built a temple and installed the idol there. The temple complex is rich in craft and sculptures of the Sen Period (15th to 18the century). According to Baraha Puran, the holy place got its name from a girl named Ruru. Lord Vishnu, who was impressed with the girl, asked her for a wish. She asked Lord Vishnu to stay at the place forever, and Vishnu obliged. Rishikesh Temple houses the four-arm stone statue of the God Rishikesh. Pilgrims worship God Rishikesh and offer Shraddha in memory of their deceased family members at the confluence of the two rivers.