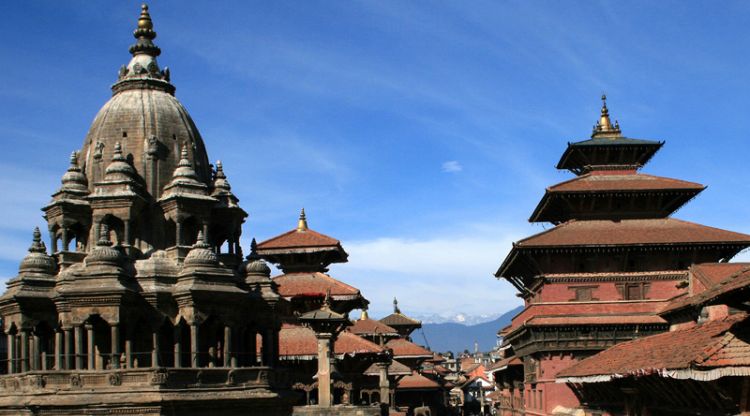 Patan Dabar SquarePatan Durbar Square is situated in the heart of Lalitpur district; on the southern bank of the Bagmati River about five km south west of Kathmandu. Patan Dabar Square is one of the historical sites listed in world Heritage List by UNESCO in 1979. It is full of Buddhist monuments and Hindu temples. Patan is regarded as the oldest city among three cities in the valley. This whole city is known as the city of metal works and artists. Patan Dabar Square is highly populated by Newars, mostly are Buddhists. Among historical sites, Patan Durbar square is the most amazing site. Square boasts of many famous sites and unique architectures. The museum inside the Durbar is known as one of the best museums in Asia. It specializes in bronze statues and religious objects. It opens daily at 9 am to 5 pm. It is closed only three days during Dashain and three days during Tihar, Krishna Mandir in Patan Durbar square was built to honor an incarnation of Lord Vishnu. This temple is the best example of stone architecture in Nepal. Scenes from the Mahabharat, Asias greatest mythological war, are carved on the wall of this temple. The Bhimsen temple is to honor Bhimsen-great wrestler, brother of Pandavs and a deity to Nepalese Businessmen, contains fine sample of metal craft. The best place, however, to see metal sculpture is the Hiranya Varna Mahabihar, the "Golden Temple". Mahabouddha Temple and Uku Bahol are also good sites. Many more temples dedicated to Ganesh, the elephant headed God, Shiva Narsingha, Taleju and others are situated in the Patan Durbar square. Many tourists and pilgrims form a big crowd everyday with uncountable pigeons.

Patan Durbar square was the Royal complex during the Malla Dynasty and stood as the capital part till the 17th century. The square is built of ancient palaces, temples, shrines and statues noted for their exquisite carvings. The last of Malla Dynasty was late king Tej Narsingh Malla. The Keshab Narayan Chowk, Taleju Bhawani Chowk and Sundari Chowk are main spots. The single stone pillar on which late king Yog Narendra Malla sits facing the Taleju Bhawani Temple to the cardinal direction of east and the Gigantic Bell to its right are also worth seeing. The important sites in Patan Durbar square include the Golden Gate and the Golden window of the old palace, beautiful, traditional metal crafts, Krishna temple with 21 golden pinnacles, the Royal bath of Sundari Chowk, Taleju temple, Viswa Nath Temple and Char Narayan Temple, which are the finest examples of wood carvings. The Bhimnsen Temple is famous for the magnificent golden balcony overlooking square. Chyasi Dega Manga Hiti and Mulchowk are also interesting sites.

This three storyed golden pagoda of Lokeshwar was built by king Bhaskar varma dated to 12th century A.D. It has a golden image of Lord Buddha on the upper floor and a large prayer wheel on a pedestal. Intricate decorative patterns on its outer wall add charm to the richness of this shrine.

This temple was built by King Jayasthiti Malla. This is only the five storied pagoda in Patan, dedicated to Lord Shiva. The golden finial was added later in 1422 A.D. During his time, the pond was cleaned and various images of Ganesh, Sitala, Narayan, Basuki, Gauri, Kirtimukh and Ama Madevata were added around the pond and courtyard. It is belived that a natural spring within the courtyard of this temple has its source in the very popular holy lake of Gosainkunda. Each year thousands of devotees visit here for bathing on the day of Janai Poornima.

Jagat Narayan Temple is located on the bank of Bagmati River at Sankhamul, dedicated to Lord Vishnu. The temple is made up of red bricks and has many fine images. An attractive metal statue of Garuda mounted on a stone monolith is accompanied by several images of Ganesh and Hanuman.

This temple is one of the most attractions of Patan city. It is famous temple in Patan and is unique for in thousand little images of Buddha in terracotta. This artistically built Shikhara style temple is a fine specimen and owes it existence to a priest named by Abhaya Raj. Each brick on the surface contains Buddhas image. The new one has been built after its destruction by earth quake in 1933.

There are four stupas supposedly built by the Emperor Ashoka in 250 A.D although there is less evidence of his visit in Kathmandu. During that time Buddhism was flourished. Marking the four corners of Patan three are mounds of earth with prayer wheels around them and the fourth is a beautiful concrete stupa near Shankhamul.
Machhendranath Temple

This temple lies in the middle of a wide, specious quadrangle just at the outer rim of the market place in Patan. This is the temple of Red Machhendranath, the God of rain. A clay image of Avalokiteshwar is kept here for six months each year, after which it is placed on a chariot and taken round the city of Patan in a colorful procession festival that falls on during April-May.

In the early 1960s, a large number of Tibetans had come to Nepal from Tibet and settled here and Nepal Government built this Tibetan Refugee camp on the outskirts of Patan. Then, carpet industry began to flourish because of their carpet weaving skills. The camp has shops that sell carpets and handicrafts such as prayer wheels made of wood, ivory, bronze or silver along with buckles, wooden bowls and jewellery. A number of shrines have been built in the camp. The camp has become one of the tourist areas.

2. Tips for guide and driver