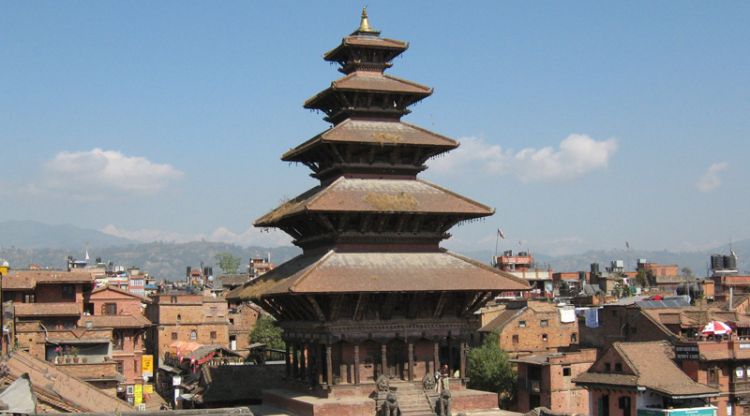 bhaktapur-durbar-squareBhaktapur is one of the older home land of Newar people. It is also known as "the city of Devotees" and "Bhadgaon". It is 14 km southeast of Kathmandu and accessible by public taxi, bus, cab and auto-rikshaw etc. Most of the tourists get surprised by its rich clay craftsmanship and architecture. This city is full of Hindu temples. According to the legend this city was founded in 889 A.D. by late king Ananda Dev who belonged to the famous Lichhabi dynasty. The city portrays the prosperity of the Malla kings and Lichhabi kings among all, the most striking attraction of Bhaktapur Durbar square is 55 windows palace (Pachpanna Jhyale Durbar) built by late king Vupatindra Malla (1696-1722) in 1700 A.D. who had engineering skills. The Golden Gate bricks-paved courtyard, the most beautiful and richly carved specimens of its kind in the entire world, was built by late king Ranjit Malla. This gate is embellished with deities and monsters with marvelous intricracy. The 55 windows palace is a unique type of structure. Among 55 windows, the first ten windows face to the west thirty five windows face to the south and the remaining ten faces to the east. The Golden Gate, the gigantic Bell , the stone pillars of late king Vupatindra Malla and the chay slin Mandap (Octoganal Pagoda) look generous there is the bronze bell on the terrace of temple known as the "Bell of Barking Dogs" which was placed in 1737 A.D. and used to give signal curfew in those days. Moreover the national Art Gallery, Taleju Vawani Temple, the Nyata-poul Temple, the Batsala Temple, the statue of king Bhupatindra Malla are major attractions for tourists. Newar art and architecture here reveal the best craftsmanship of the Malla period (12th and to 18th century). Pottery and wearing form its traditional industries. People make yogurt known as "Juju Dhau" or "King Curd" Bhaktapur Durbar Square is listed is world Heritage list by UNESCO in 1979.

Around 4 sq km city area, the second major attraction for tourists is Datta Traya Square. It was also built by late king Bhupatindra Malla in the 17th centuries in Pagoda style. It is believed that this temple was built by the woods sawed out of a single tree. This three storied temple is dedicated to the three-headed Deity of the orthodox Hindus, symbolizing the combination of Brahma (the creator), Vishnu (the preserver) and Maheshwar (the Destroyer). The square deserves a marvelous gallery of intricate wood carvings. This showed the craftsmanship of medieval period, showing charming paved roads, red bricks houses and a way of life. In its periphery you can see temples and monasteries. The Art Gallery includes ancient manuscripts, thankas, stone sculpture and antique paintings belonging Hindu and Buddhists traditions.

Siddha Pokhari is one of the largest water tanks in Bhaktapur to supply drinking water built by late king Yakshya Malla in the 15th century. This large tank is occasionally opened for fishing and boating.

This is the unique temple of Bhaktapur, Literally means "Five storied" is also having distinction of having withstood the devastating earthquake in 1933. It is dedicated to trantic goddess and the leading steps are flanked by stone sculptures. There are two statues of Malla era wrestlers at the base representing humans and in ascending order of power and strength; there are creatures each ten times powerful the preceding era.

This stone temple of Batsala Devi is famous for intricate carvings and the bronze bell that was put by King Ranjit Malla in 1737 A.D to announce the beginning and end of the daily curfew. Locally it is known as "The bell of barking dogs" as it gives howling sounds. These days, it was rung when the priests worship Goddess Taleju.

Bhairarnath Temple was set up by king Jagat Jyoti Malla and later improved by king Bhupatindra Malla, the expert artist, dedicated to Kasi Bhairav, the dangerous aspect of Lord Shiva. It has only the head of Bhairav in the inner santum. Legend has it that Kasi Bhairavs head was cut off by a tantric expert in order to keep him in Bhaktapur. It is a worth-visiting.

The potters town of Thimi is 10 km east of Kathmandu. Most of the people are engaged in pottery. It supplies its pottery and vegetables to Kathmandu. The most important deity here is Goddess Balkumari. The medieval lifestyle of the farmers is main attraction here.

changu-narayan-templeThis the oldest Hindu temple situated on a magnificent hill top 6 km north of Bhaktapur. This temple was built by Hari Burma in 323 A.D beloged to the Lichhabi Dynasty and later inscription was put by king Man Dev in 464 A.D. This temple is called "sako changu" by the local ethnic Newars. This is the temple of Lord Vishnu or dedicated to Champak Narayan. The two roofed pagoda temple is richly decorated with sculptures and carvings. Two tiered temples a couple of stone elephants, a form of Narayan, having 10 arms going through the different layers of univers are its main features. There is also image of Garuda, the mythical bird that serves as Vishnus heavenly vehicle. It is important and valuable temple.

2. Tips for guide and driver